After completing my post/response to a previous article, I read Women scholars’ experiences with online harassment and abuse: Self-protection, resistance, acceptance, and self-blame, a research article which surveyed both Canadian and American scholars in various fields. I mention my previous post for I unfortunately found myself (once again) depressed with the fact that I would not have to read the article to know the outcome.

However, it was worth it. The sheer distance some scholars are willing to go to in order to preserve their integrity and fight for social justice is admirable, while the opposite is true of their oppressors. Academically, I was happy to learn of how different coping mechanisms were categorized. I believe I fall in the acceptance category quite often in not in defense of myself, but rather as an empathetic feeling to online vitriol and harassment. 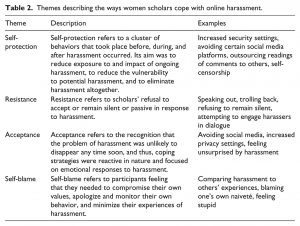 For now, I do not have much else to say of the subject, it’s upsetting. The research and flat truth of the article speaks for itself. though I will say that I hope one particular recommendation in the study is pursued:

Significantly, we strongly recommend that women and other targeted groups need to be involved in decision-making, software development/consulting, and policy development as it is their experiences that will inform how to respond and hopefully resolve the problem of harassment.

Giving a higher measure of control to our scholars could possibly prevent some harassment from occurring.

Link to article (with table):